In the immediate hallway were the numerous accolades and The James Beard Foundation Awards for Harvard Common Press’s acclaimed cookbooks.

I particularly enjoyed seeing the vast titles of cookbooks published by HCP including Not Your Mother’s Slow Cooker and Salty Sweets. Each blogger received a gift of a cookbook including A Baker’s Field Series (Marie of @ChocoAndWine), Bonne Femme Cookbook (Renee of Eat Live Blog), Ginger Bliss and the Violet Fizz (Richard of Passionate Foodie) and Gourmet Gifts (Jessica, a gastronomy graduate student at BU). 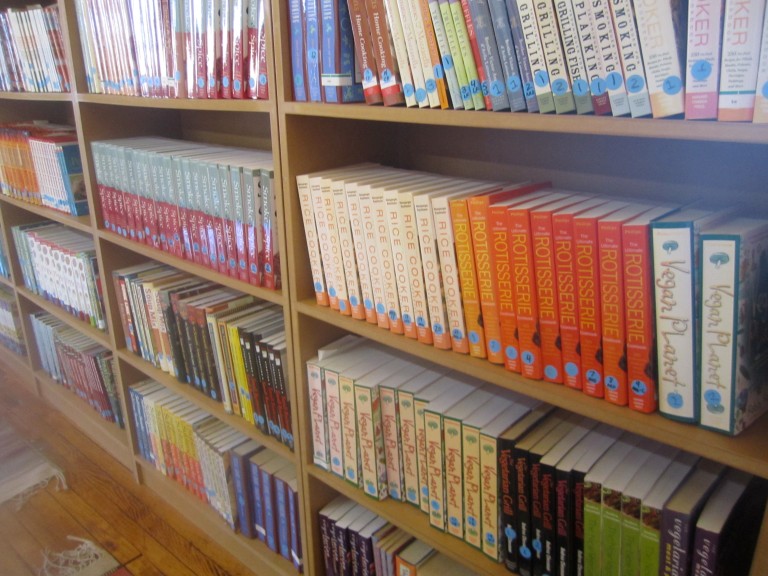 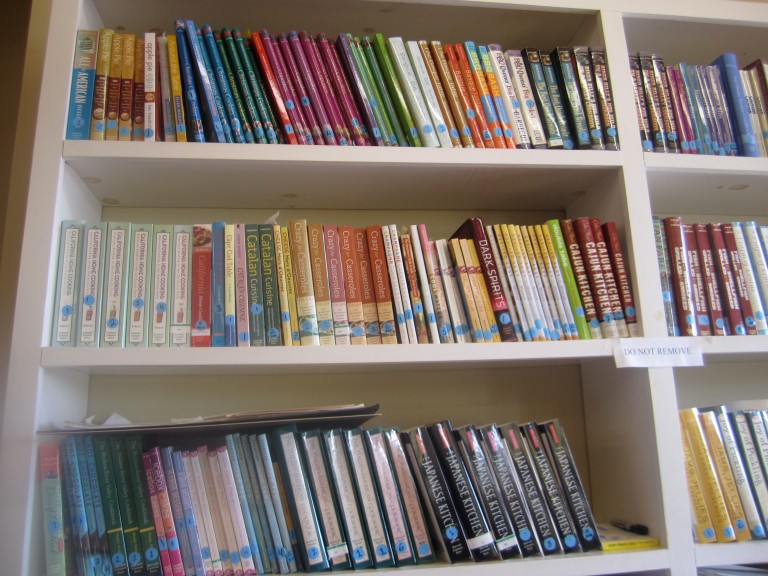 Each HCP office has natural light and numerous bookshelves surrounding the work space.

Bruce Shaw, President and Owner of Harvard Common Press has an unbelievable office filled with treasures from Mexico and of course, literature.

Several piles books were near his desk area including California Home Cooking and Foodista.

Additional art displayed in Bruce’s office. What really caught my eye was the latched door, which leads to other offices on the 5th floor. 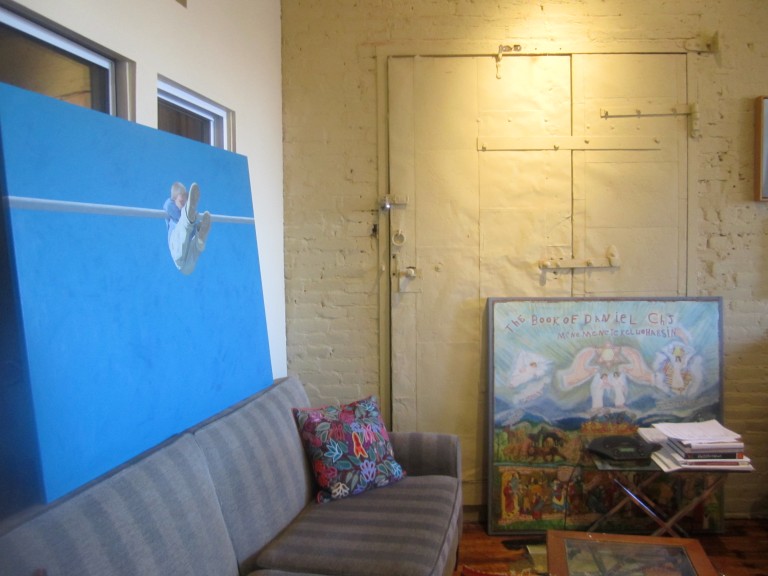 Bruce offered his humorous anecdote, which lead to his travels to acquire vibrant, patterned Mexican rugs from a town with 300 rug weavers. He wanted to prevent his fellow heel-wearing colleagues from tripping on the wooden floors!

Oaxaca is on my travel bucket list (I have been to Cancun and Playa de Carmen, posts forthcoming).  Hopefully in the near future, I will have the opportunity to enjoy the cuisine, moles and artisans that Rick Bayless fondly speaks of. (Bruce mentioned he worked with Toni Sobel as his guide to Oaxaca).

Other eye-catching pieces featured throughout the hallways.

The spread was lovely mix of tea breads and cakes. 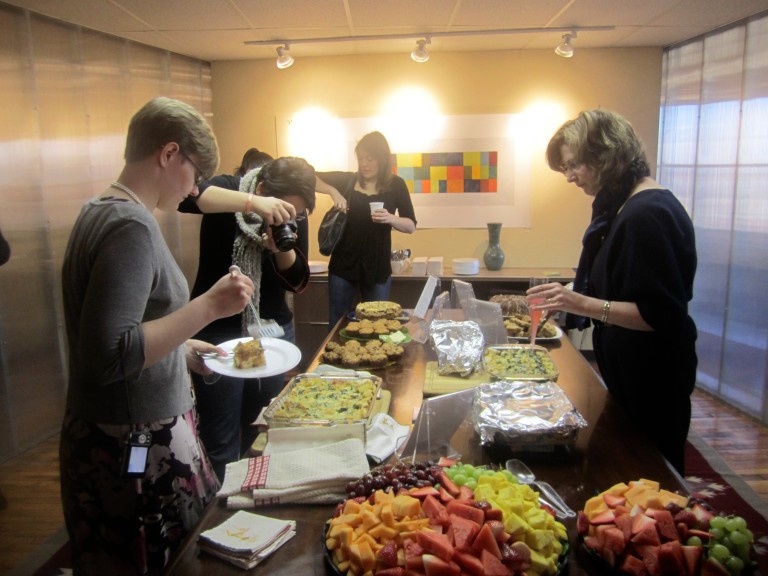 Fruit Muffins (with and without nuts)

Pear Bread with Vanilla and Ginger (The Best Quick Breads) 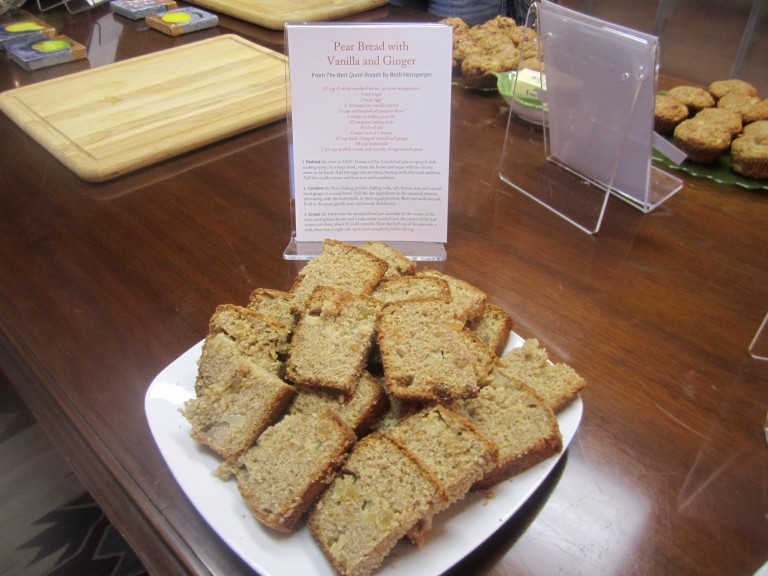 The spinach and cheese strata was by far my favorite item served at the brunch and look forward to attempting this myself. The eggy soft bread was laden with bits of spinach and melty gruyere and parmesean cheese.

Harvard Common Press announced they were launching a blog called BlogEats, which has astute posts about trends in the food and blogging industry.

I sat across from Kathy Can Cook, Jessica of Don’t Mind The Mess and next to Marie of @ChocoAndWine. Jessica mentioned her favorite parenting book, published by HCP is The Birth Partner. 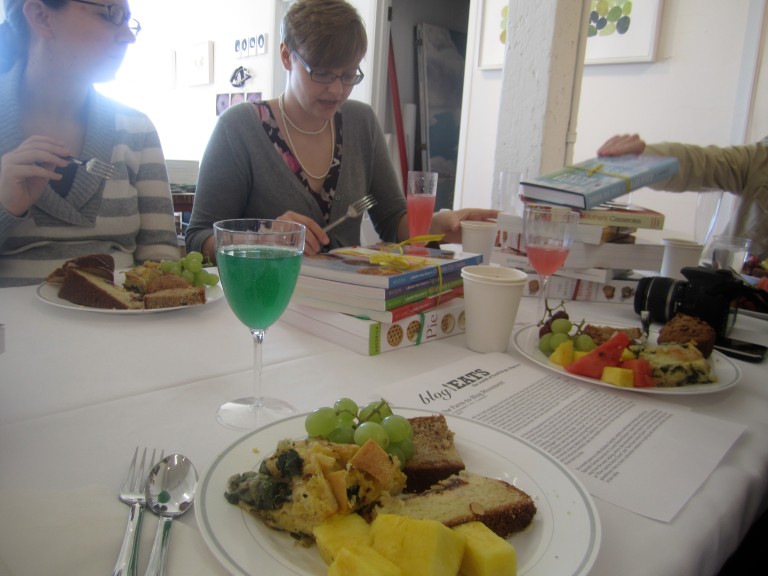 Alejandro Narvaez waiting with the wine before his tablemates join him.

We enjoyed our brunch at the Simonds Studio, which featured gouaches on paper with blocks and ovoids and is located on the same floor as HCP. 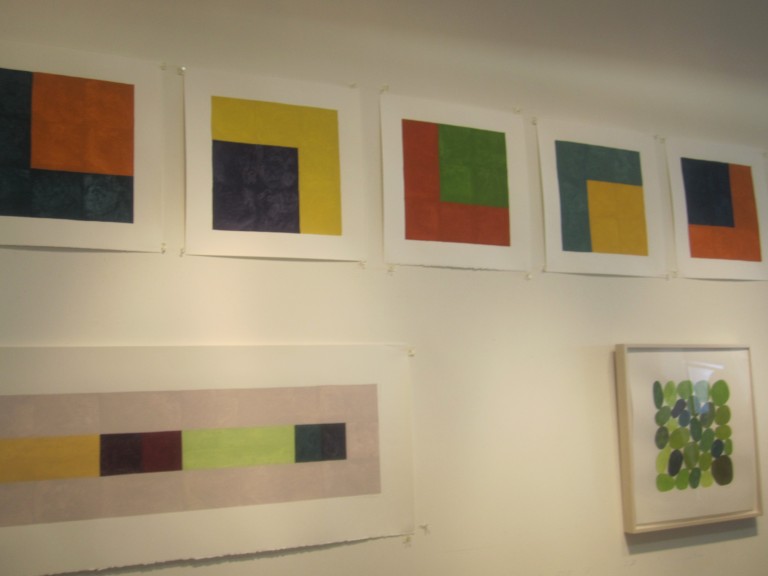 The ginger bread had a nice sweetness and spice. Finally, I really enjoyed the spinach and cheese strata (not featured in the photo because I gobbled it up first).

I had glass of Harvest Bowl (Good Spirits), a holiday green cocktail with champagne and blue curacao and a glass of white wine courtesy of Passionate Foodie and AncientFireandWine. 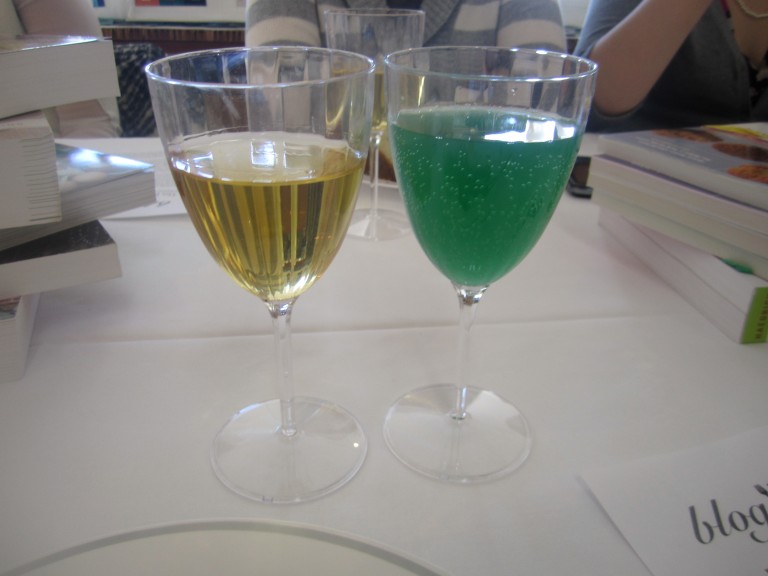 My glass of wine was from one of these two bottles!

What I found interesting was during the the round table introductions of blogs everyone mentioned their Twitter handles, displaying how much food bloggers have adopted other mediums of social media.

Adam Salomone, Associate Publisher was a very dynamic speaker and clearly passionate about his work. He explained the various criteria for food bloggers to become authors and the various stages of cookbook development. The conversation he led stirred a great dialogue about industry trends and digitization of food content and cookbooks.

Bruce Shaw mentioned about the symbiotic relationship between publishers and bloggers, both competition and customers. Additionally, he said cookbook authors need to create 100-150 new recipes versus filling 25% of a cookbook  with already used content.

Nancy Grant Mahoney explained additional marketing initiatives and the various media constituencies that need to be reached for a proper marketing launch.

To my left, I sat with Jennifer, a Masters student at the BU Gastronomy program and the two Emilys, Emily of WhatEmilyCooks (who picked up The Joy of Pickling) and Emily of Harvard Common Press.

I attained a galley copy of Herbivoracious, along with cookbooks, Vegetarian Planet and Pie (Anthea of Night Kitchener also picked this up). I am looking forward to testing a few recipes in the near future and being inspired.

I chose Pie to improve my pie technique. I openly admit I have not been hyper successful in crafting tarts, galettes and pies. This specialized cookbook would give me the tips and techniques to make better executed and delectable pies.

As for my rationale for choosing Herbivoracious and Vegetarian Planet, I am a former vegetarian. After reading Peter Singer’s Animal Liberation I was moved to become a vegetarian for a year and a half, until I met my two nemeses, a pepperoni pizza roll and a meat eater.

Over the years, I have read enough of the veggie centric literature by Pollen, Bittman, Freston and I have seen films such as Food, Inc and Forks over Knives to push me to want to increase my green plant life consumption in the upcoming new year. 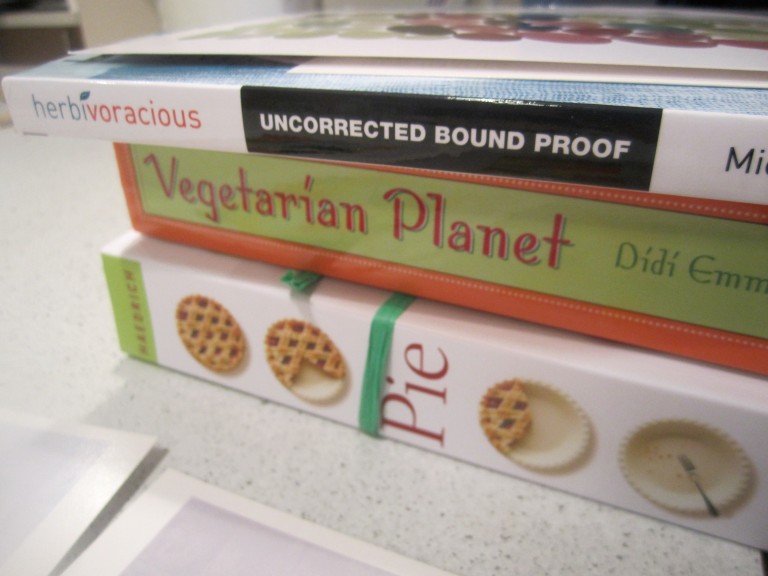 Special thanks to the warm Renee Hirschberg of Eat Live Blog who organized the brunch afternoon with HCP. Hopefully, we will see a Boston Brunchers cookbook someday.