The TV Diner Platinum Plate Gala held at the Seaport World Trade Center was a foodie charity event on Friday, January 20, 2012, which had 40 various Boston restaurants and vendors, with 2,000 total attendees.

Proceeds from the live auction were donated to Horizons for Homeless Children. The HHC’s mission  is to improve the lives of homeless children and their families. We provide homeless children in Massachusetts with the nurturing, stimulation and opportunities for early education and play that all children need to learn and grow in healthy ways.

Tillinger’s did a great job with the decor. The large Commonwealth Hall was elegantly decorated in shades of white, silver, purple and blue. There wasn’t much natural lighting in the room, but all the low lighting and floral centerpieces made the space quite romantic.

The event was fun and with 2,000 attendees many dressed to the nines, it was quite crowded. There were long queues at the bar and food stations, which meant we had to juggle our plates or grab a few items to nibble in the corner or at a standing table with other guests. 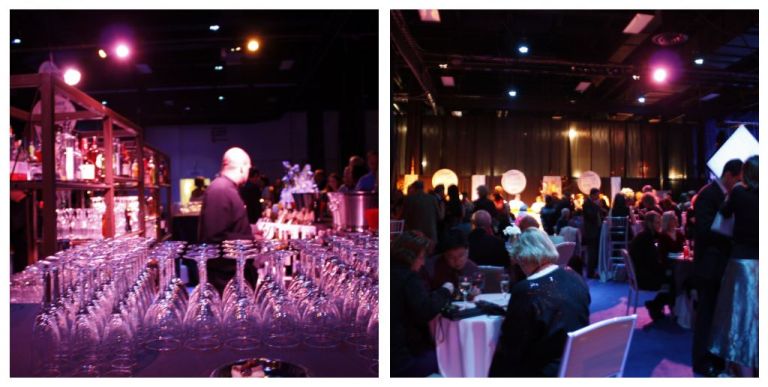 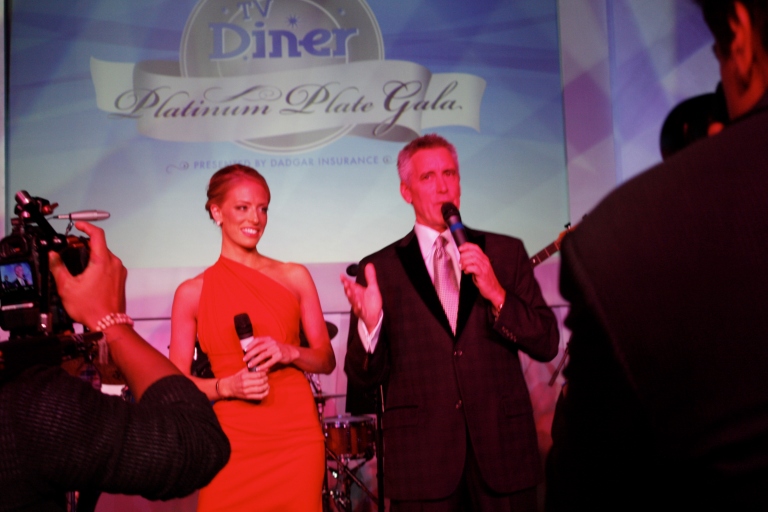 We tried the Banfi Rosa Regale chilled sparkling rose and were thrilled with the crisp, effervescent medium sweetness of this festive cranberry colored rose. There are hints of raspberry, strawberry and rose when you sip. A bottle of this sparkling rose retails for about $18. 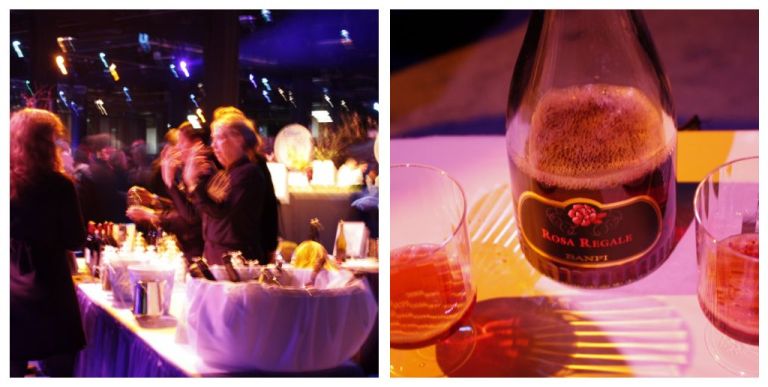 Chilled duck confit on crostini with sweet and sour cherry preserves from Stephi’s On Tremont (BMH review). This was also a pretty good starter. The tartness from the cherries cut through the unctuous duck. 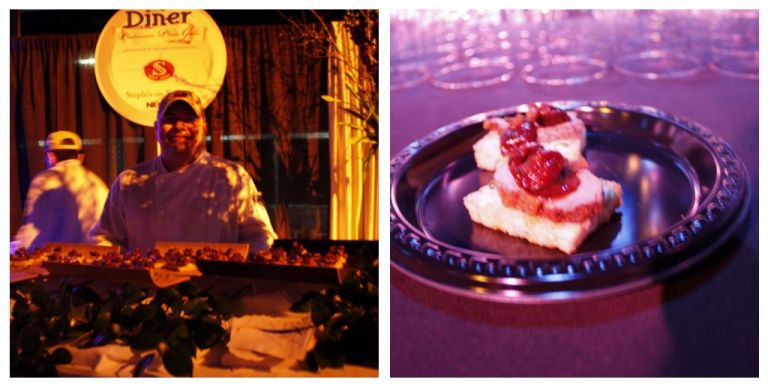 Crazy maki rolls and seafood with avocado salad on endive from Samba’s. This food station was quite popular because you could have a few different Japanese sushi items at once. The maki rolls were fresh and very good. The salad was a bit heavy on the spicy mayo.

Thai spiced duck breast with warm noodle salad seasoned with a touch of jasmine tea from Aura. This was a great dish, we’re partial to duck in many forms, but the presentation was cute, in little bamboo boats, that we had seconds. 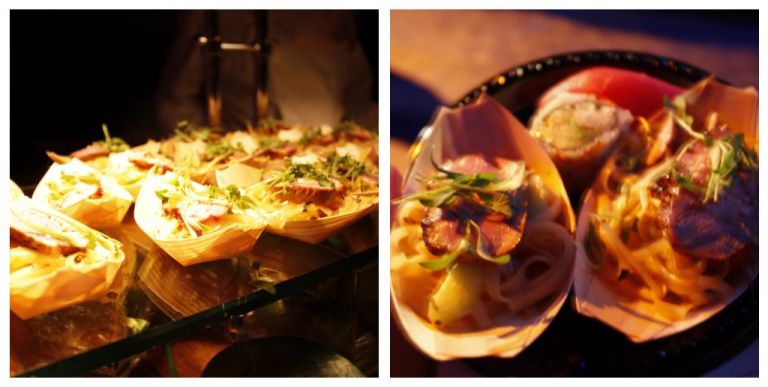 Salem-based restaurant, 62, (BMH review), served braised beef short ribs with a mash. The short ribs were flavorful and went well with the smooth mash and frisee.

The Korean braised pork sliders from Top of The Hub had a nice marinate and was presented by a very warm host. 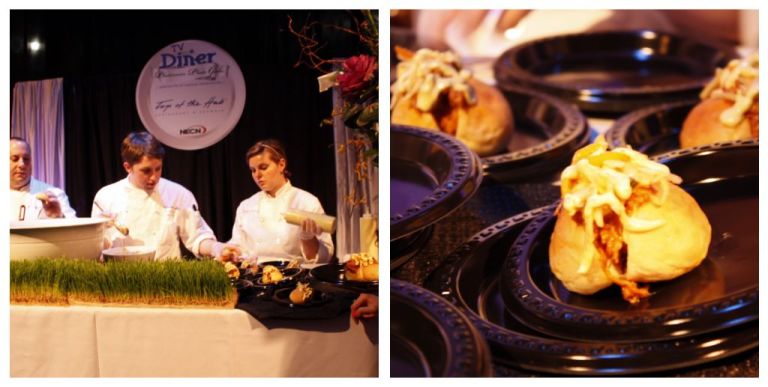 Pasta bolognese (left) from Donatello and Seafood rotolo (right) from Bobby C’s in Melrose. The rotolo had a nice sauce and a tender scallop in the middle.

More short ribs and caesar salad which we passed up on because we needed to take a break. However, we paused to try the red wine braised short rib and truffled whipped parnips on top of a pepper Parmesan cracker spoon from Stephi’s On Tremont. The presentation for this dish was very clever since you could eat the cracker spoon.

Red Lantern (BMH review) prepared spicy tuna bites with microgreens. The tuna was fresh and well presented.  For attendees who don’t like a lot of heat, removing the sliced chili on top was helpful. 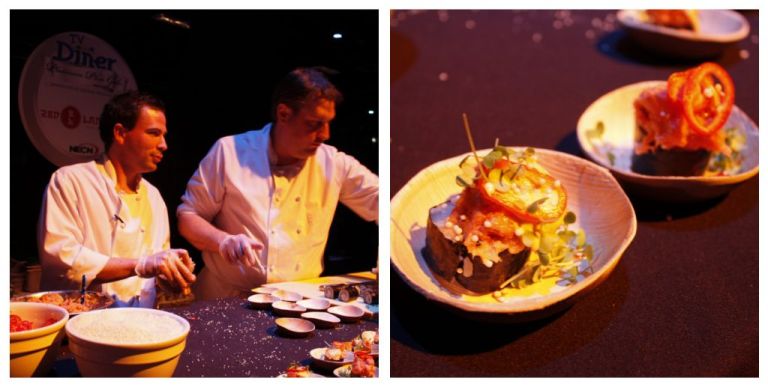 The Hip Pocket Orchestra were absolutely fantastic. The vocalists and musicians were very talented and we back by popular demand. They played hits from Adele, Michael Jackson and Michael Buble. 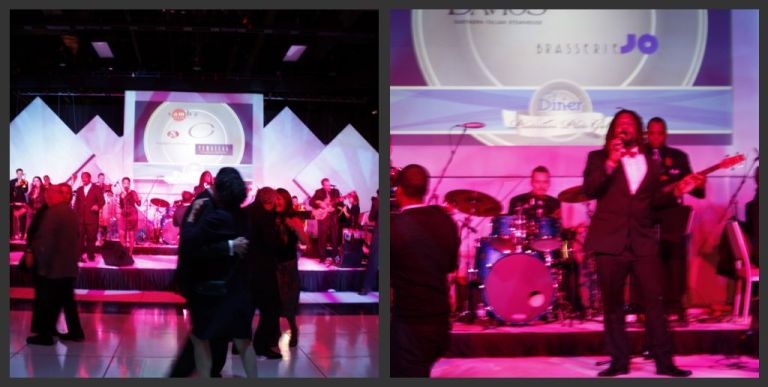 Market turned out divine Maine Diver scallop sashimi on top of crispy rice cakes and their techno lounge, Descent made a lovely cocktail. The scallop sashimi was so silky smooth and the rice cake was piping hot. We loved the combination and texture so much and this was one of the best dishes on the floor. The homemade jellies, airy strawberry marshmallows and caramels were to die for and we kept wanting more.

Red Rock Bistro served smoked brisket tacos. The brisket was tender. We passed on this steak and potatoes dish. 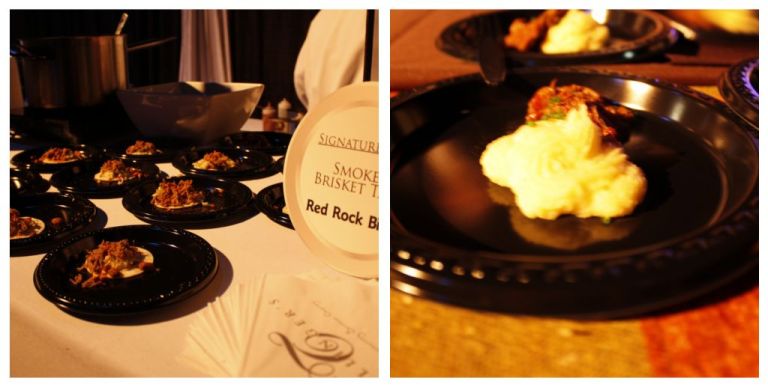 Decadently rich chocolate stout cake from Barrington Brewery. This was the best cake of the night. You couldn’t taste the stout in the batter but it was light but richly decadent fudgy cake that was very popular with the crowd.

It may not have been as visually fun and appealing as the 7 tier, 6 layer fondant-Jenny-and-Billy topped vanilla rainbow cake made by Cakes for All Occasions, but it certainly was taste bud symphony showstopper. 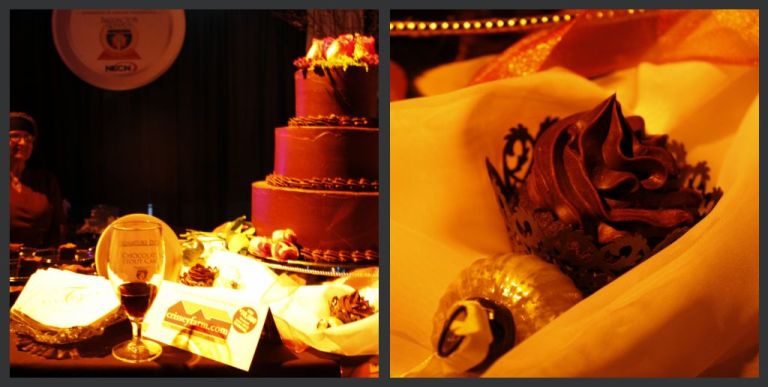 Tasty Burger (BMH review) was an unexpected surprise. This local Fenway burger joint gave away whole full-size burgers. The beef patties were medium rare and dressed with sweet sauteed onions and BBQ sauce. They were the perfect contrasting junk food to have compared to the other fussier or high-end dishes.

Clancy’s provided their 2011 Boston Chowder Fest award-winning clam chowder. It was delicious. This chowder didn’t have a lot of wet soup like some or stick-up-straight cream paste  like others, but rather packed with huge chunks of clam, seafood and potato lightly coated in a thin traditional cream sauce. We can see why this chowder won such high acclaim.

The creamy mint green chowder had hints of coconut milk, fragrant spicy ginger, sharp lemongrass and curry. The texture of the chowder was silky and light with large chunks of shrimp and soft jasmine rice underneath.

This is one of our favorite locally brewed root beers. Tower Root Beer, started making root beer in 1914. Both the diet and traditional root beer are unbelievable and have the perfect amount of fizz.

Modern Pastry (BMH review) had a large cake sculpture of its building which was adorable. They had their traditional Italian cookies, cannolis, mini everything and guests were taking plates by the fist full.

San Pellegrino served refreshing plain and flavored sparkling water. Great for palate cleansing in between all the plates of food. The men at this station were light-hearted and comedians. 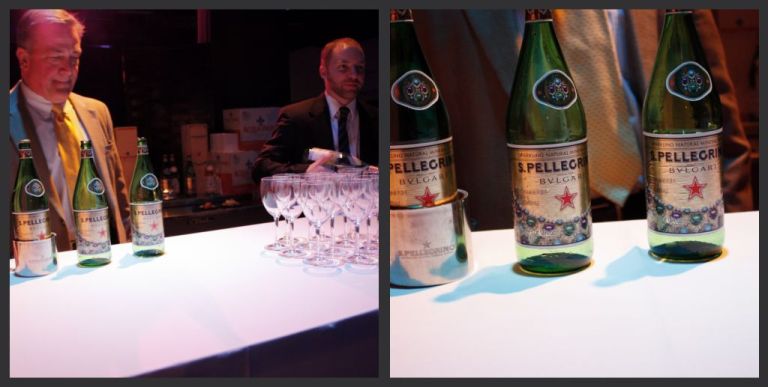 Bricco‘s housemade bread was made into mini sandwiches filled with salumi or mortadella. Although they were tasty, we felt splitting one was enough as it was basically a well made sandwich.

The freshly-made-on-the-spot mahi mahi tacos from Champion’s. There’s slightly seared tuna, Cajun mayonnaise with a kick, cabbage and a sprinkle of cheddar cheese. If you loved this dish as much as we did, you can always order this new menu item at the sports bar. They were also giving out BOGO entree coupons as incentives to come in. 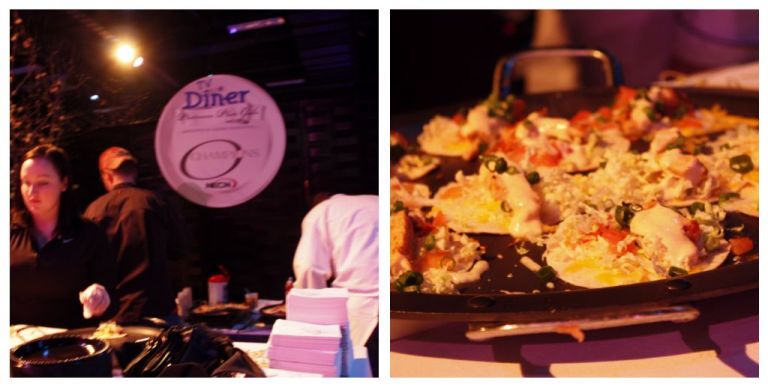 Bokx109 served braised beef short rib with bordelaise sauce and a side of crispy vegetables. The corn and vegetable medley added the crisp and fresh flavor, which enhanced the beef. 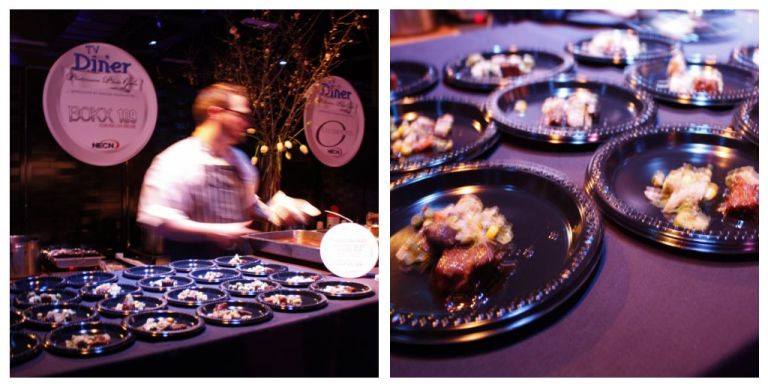 Davio’s served up their signature philly cheese steak spring grolls and their shrimp spring rolls. They were melty on the inside and were presented in a very clever way. They could be purchase from local markets or BJ’s.

Brasserie Jo, located in the boutique Colonnade Hotel, served a country pork belly plate.  It consisted of chilled velvety pork belly pate with a pleasantly sharp beaujolais mustard on a crostini. The presentation was very smart and they utilized the bar shelf structure to provide flow at their table. Diners could grab a crostini and not build a queue.

Pete & Gerry’s own Heirloom Egg Custard with maple walnut topping was one of our favorite desserts of the night. The smooth, cool, egg custard was very much like a light flan and just perfect after eating lots of heavy comfort foods. The walnut topping added a nice contrasting texture.

The light blue heirloom eggs were unique and it was nice to see something other than the standard white or brown eggs. They were also passing out $1.00 off a dozen egg coupons. Ironically, we had picked up a half-dozen carton of their eggs to blog about and test if there was a difference. Stay tuned.

Vermont Creamery brought several artisan farm cheese that were fabulous. They were served with crostini and apricot spread, a great combination. Their award-winning goat cheese with ash was creamy and a favorite.

The goodie bags held a cookbook by Dede Wilson (The Birthday Cake Book and A Baker’s Field Guide to Cupcakes published by Harvard Common Press), a copy of Stuff magazine, a strawberry-kiwi lip balm promoting Revere, garlic basting/grilling oil and Swiss crepes from Wegman’s and tender chocolate whoopie pie from The Whoopie Wagon.

The whoopie pie had the best icing we ever had. Not overly sweet, a fluffy texture and made me want to lick residual icing on the packaging. 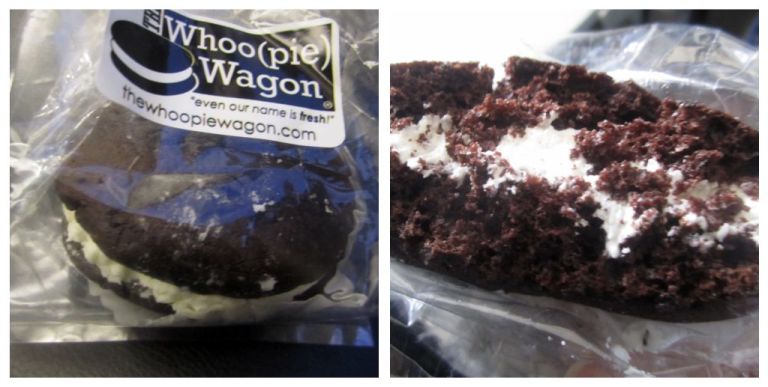 A few things we noticed was that there were not a lot of vegan or vegetarian options. We wouldn’t recommend attending this event unless you love meat, seafood and sweets or just prefer to imbibe at the open bars .

The primary entrees of the evening were beef short ribs. Given that it was a cold winter night, warm comfort foods were key. We also noticed that the foods we enjoyed most tended to be made fresh at the food station and served piping hot.

Disclaimer: We received complimentary entrance to the event, all opinions are our own.