Max & Dylan’s Kitchen and Bar is located in Downtown Crossing. It is under the same ownership as Scollay Square in Beacon Hill and there is some overlap in the two menus. We enjoyed all the dishes we tried and thought it was reasonably priced. The entrees were priced around or under $16 and appetizers under $13. 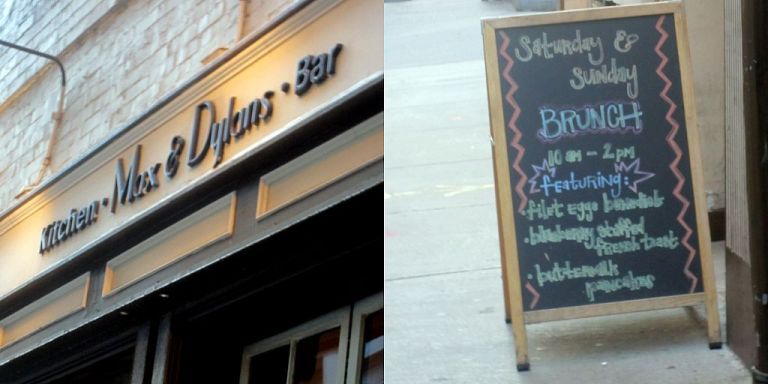 The atmosphere is clean and the bar is a nice light wood. As the evening progressed, the restaurant became pretty full. I could envision Noel Gallagher’s music played (NPR’s interview of former Oasis front man and love his song If I Had a Gun and the acoustic version).

Our server was very friendly and attentive, however he did seem much less present or distracted when service got noticeably busy which is understandable. He suggested a lot of his favorites which included the spinach and artichoke mac and cheese, buffalo mac and cheese, chipote bbq chicken salad, braised short rib sliders and fish and chips. The table next to us ordered the beef tenderloin flat bread with leeks and truffle oil, looked interesting.

We started our meal with the 2009 Meridien Pinot Noir and the 2009 Saint M Reisling and then my friend ordered for us to share the Seared Scallops and Lip Searing Rare Ahi Tuna, Citrus Soy, Chili OIl, Wasabi, Wakarne. The scallops were delightful and tender. I would order these again.

The scallops had a nice crust, a bit of spice and a lovely flavor. They were nice and warm, tender and buttery. I could have eaten this one on my own and would order the scallops again. The Ahi tuna was sprinkled with black and white sesame and the seaweed salad was a nice contrast.

The Grilled Salmon Filet with Citrus Soy, Grilled Asparagus and Fingerling Potatoes for $16. The salmon had a nice glaze and was super flaky. 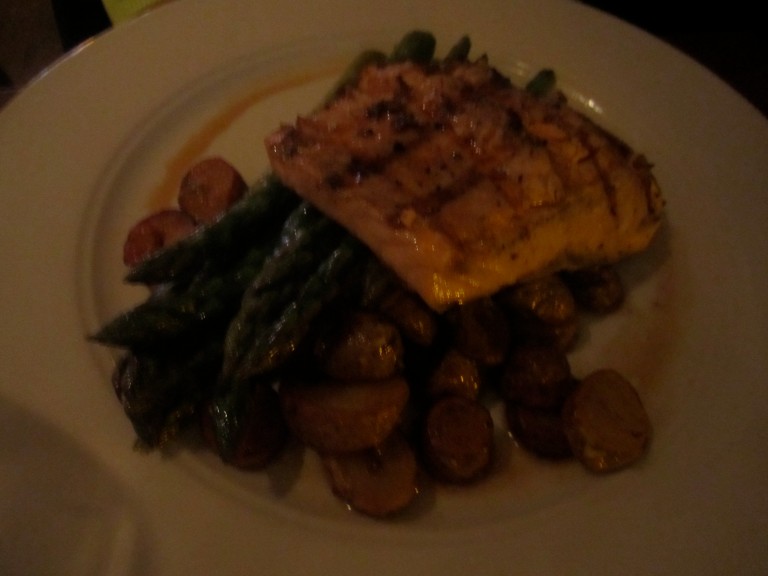 My Blackened Swordfish with fingerling potatoes and skillet corn for $16, was delish. I would come back to Max and Dylan’s for this reasonably priced entree. The crusted swordfish that was well cooked and cut smoothly to reveal the white fish. The swordfish was topped with sweet tomato jam and it highlighted the sweetness of the corn. The skin of fingerling potatoes was nicely seasoned and tender on the interior. 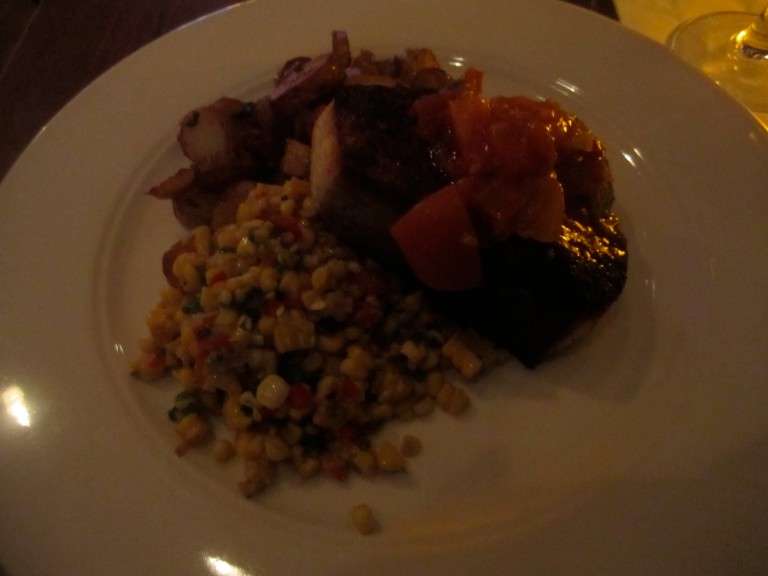 Max and Dylan’s is known for their various iterations of mac and cheese. We tried the Buffalo Mac and Cheese, per our server’s suggestion, which had tender, flash fried chicken and the flavor of the buffalo was in the creamy sauce which coated the pasta. It was addictive.