Hangawi is a lovely Korean vegetarian tea house and zen oasis in Koreatown. The ambiance reminded us of Cha An in East Village (BMH’s reviews of Cha-An – Revisited) and event had pitted seating for our feet as we sat on the floor. 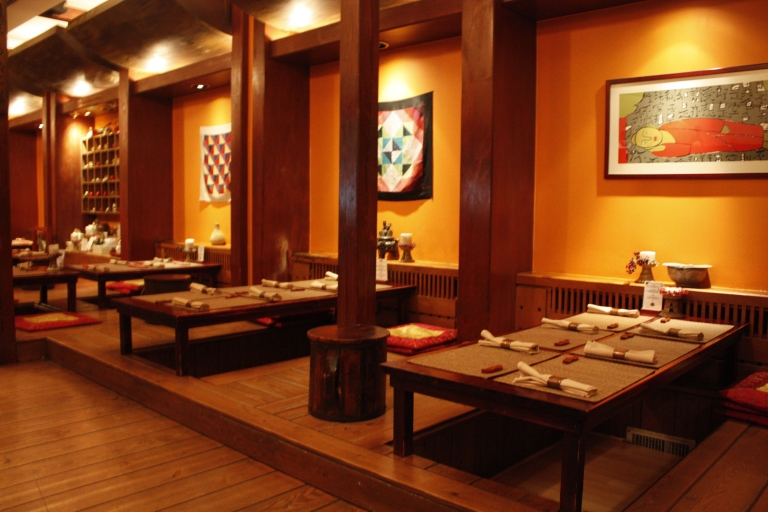 Upon entrance, there were little cubbies for shoes. We took our shoes off and entered the wooded lined tea house. 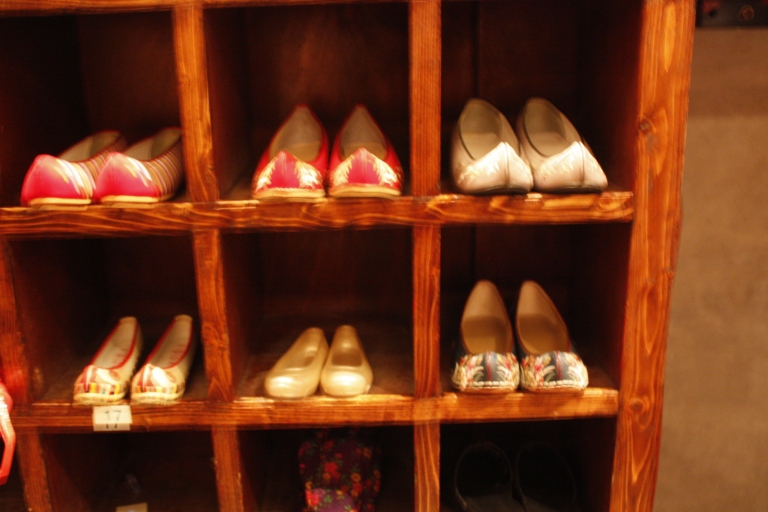 We started our meal with a fragrant and warming ginger tea for $6 and a gelatinous pumpkin porridge starter. The porridge was dense and quite filling and we definitely sampled some, but waited for the remainder of our meal.

The third picked Korean green tea from Mt. Jilee  ($6) was crisp and strong and was served black sesame porridge. The porridge was a gray hue, nutty and very smooth.

Our dining companion chose the Ginseng Lunch for $22 which included a shredded ginseng salad, vegetarian dumplings and a tofu clay pot in ginger sauce served with multi grain rice and house made kimchi. The dumplings itself were filled with lots of veg and was served very beautifully with bits of carrots and an purple pink orchid. 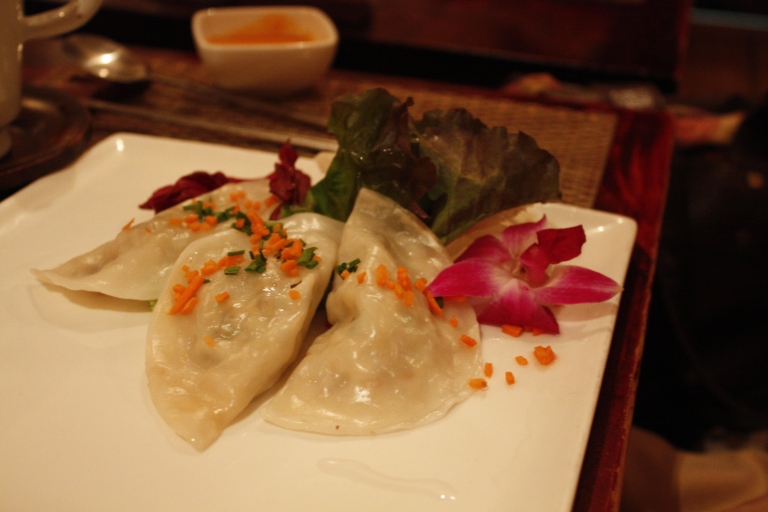 The bitter and refreshing ginseng salad had a kick of heat from the ginseng root and  bean paste dressing. The shredded carrots and assorted vegetables acted as a cooling mechanism. The salad would be a great palate cleanser and it definitely got our energy flowing for the day. 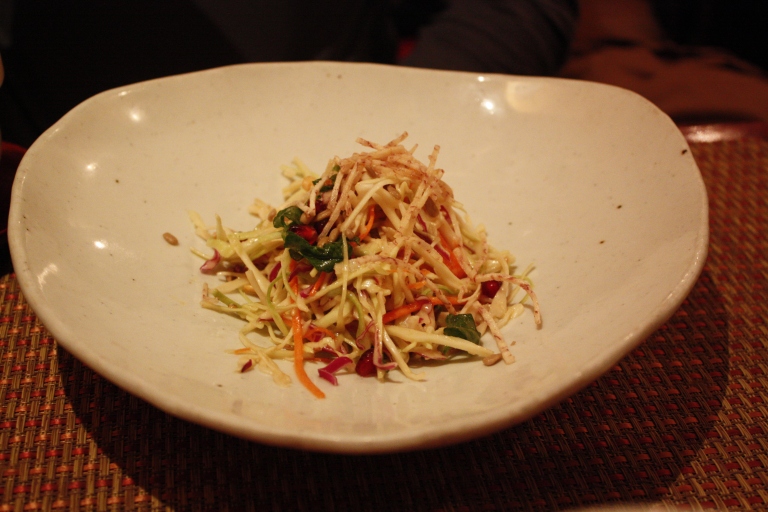 The spicy chili mushrooms for $17 was by far the best dish we sampled and a is must order again. The earthy mushrooms were encrusted in a light tempura batter and served with cucumbers and sweet bell pepper. The chili sauce gave the perfect hint of spice and we were happy campers. So darn good. 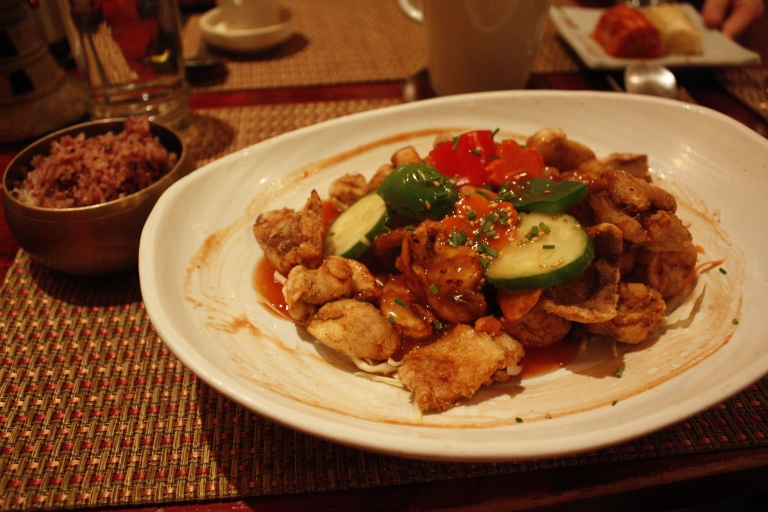 The house made kimchi was some of the best we have ever eaten. There was a nice tang and spiciness. It was really delicious with the multigrain, nutty brown rice.

The Mini Emperor’s Lunch for $22 included a vegetarian stone bowl with an assortment of vegetables over rice served in hot stone bowl with hot chili paste. The stone bowl was super hot and contained the rice mixture. 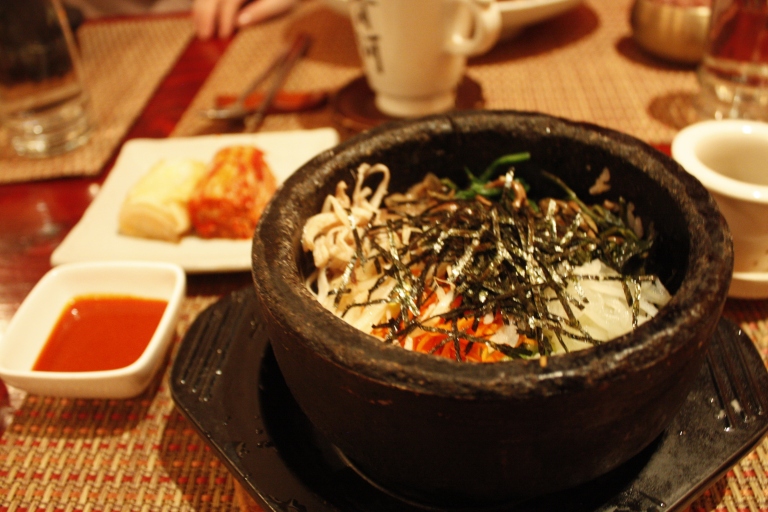 The shreds of nori (seaweed) provided an element of texture and salty flavor. The mushrooms, carrots, sprouts and rice were a great combination.

We finished our meal with dessert, a cool cinnamon flavored broth. Our server said it was for sipping, which was self explanatory! quite frankly, we were a bit disappointed by dessert and thought it would be a slices of green tea cake or something more exotic.

Overall, our afternoon visit to Hangawi was a success. Our bellies were full of vegetarian Korean, our spirits were renewed and calm. Hangawi is perfect for folks who are interested in  vegetarian or gluten-free. We did not leave hungry 😉